Le Grand Towers is located in one of the most coveted addresses in the country – Quezon City. In particular, it is located within a highly urbanized part of the city, Libis. As the capital and most populous city of the Philippines, this is the center for commercial, political, industrial, and real estate industry. The city was named after the former Philippine president, Manuel Quezon. It is also one of the largest cities that make up Metro Manila in terms of land area.

One of the reasons why Quezon City was chosen as the location for Le Grand Towers is because of its proximity to many attractions and top destinations. For the urban dweller, the location of the condominium is of great convenience. It makes it possible for the future unit owners at this condominium to save time during travel to and from work. In fact, there are some businesses, schools, and shops that are located within a short walking distance.

The Libis area, in particular, is one of the most notable districts in Quezon City. It is an entertainment and shopping hub. Thus, it is a favorite among the young and hip crowd. This area offers plenty of opportunities for shopping, dining, and entertainment. The nearby Eastwood City is also developed by Megaworld Corporation, which is the same development team behind Le Grand Towers. This hot spot is home to many commercial spaces and businesses that can provide for your basic and lifestyle needs.

Speaking of its proximity to major destinations, Le Grand Towers is close to many notable schools and educational institutions. Among the most notable schools in Quezon City are UP Diliman and Ateneo de Manila University – two of the top ranked universities in the country. Other schools within the area are Miriam College, Trinity University of Asia, New Era University, FEU-Diliman, and St. Luke’s College of Medicine.

When it comes to transportation, getting around Quezon City and other points of Metro Manila should be easy. There is easy access to public transport systems such as the LRT-1 and LRT-2 rail systems that pass through Quezon City. In addition, the planned MRT-7 project will also be located in North Avenue, which is also in Quezon City. Aside from that, the location of Le Grand Towers gives it accessibility to other major road networks and highways such as Ortigas Avenue, Araneta Avenue, EDSA, NLEX, and Quirino Highway.

There are also lots of shopping centers and malls in the Libis area for residents of Le Grand Towers to consider. Eastwood City is a top destination in itself, which is a hub for entertainment and shopping. When you need to go shopping, you can choose from the following malls in the area: Eastwood Mall, Greenhills Shopping Center, Trinoma, SM Megamall, Tiendesitas, SM City Fairview, and Power Plant Mall.

For your other lifestyle and entertainment needs, there are endless opportunities available near Le Grand Towers. Here are some of the top attractions in Quezon City: Quezon City Memorial Circle, La Mesa Ecopark, Mystery Manila, and Maginhawa Food Park. 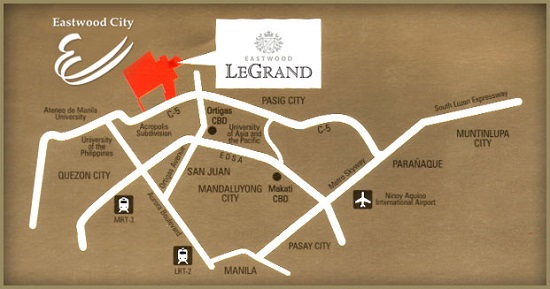